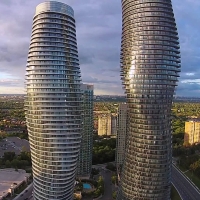 Mississauga has many nooks and crannies. With almost all of its neighborhoods having developed independently, it is no surprise that there is so much character. The city is full of options, simultaneously providing a city-like lifestyle near the city center core, suburban conditions, and a small-town village atmosphere throughout.

So where does one start? Out of the 16 neighborhoods of Mississauga, we’ve selected the 5 most distinct areas, with consideration to Amenities, Charm, and Price. It’s worth to consider that Mississauga is generally a safe place to live throughout, features competitive tax and utility rates, and borders Pearson International Airport, which is excellent news for travelers. It also boasts a comprehensive and reliable bus system, which is generally accessible to everyone, but as you’ll see, some benefit more than others.

If you love entertainment, well… there is never really a dull moment in Port Credit. Marked by the white and red lighthouse, Port Credit’s main stretch of road - Lakeshore Rd. # - is a quaint combination of bars, restaurants, grocery markets, and boutique commercial stores.

Although known commonly as a retirement area as far residents go, there are plenty of families that live here, with younger adults populating the street in the evening. It emanates a true village vibe, with patios and waterfront walkways that invite pedestrians to enjoy the scenery on foot.

It’s also the main harbor of Mississauga, with many yachts docked by the Credit River. And if the scenery isn’t enough there is no shortage of local events either. From big to small, Port Credit gives and entertains through their Busker Fest, Movie Nights, Farmer’s Markets, and The Waterfront Festival, to name a few.

All of this does come at a price, literally speaking, with many of the condos sitting by the water reaching upwards of $1,000,000, and houses far more. Parking is also limited in the area, which in part adds to the pedestrian vibe, but transportation is still quite accessible. Clarkson Go is just a few minutes walk away along with the Hurontario bus route, and the Gardiner Expressway is quickly reached by car, giving residents excellent access to Toronto and the rest of the city.

For those looking to start a family, they should look no further than Streetsville. Boasting some of the best schools in Mississauga, with John Fraser Secondary actually being considered the best, it is definitely a place to invest your child’s education in. It may look like another suburban division at first glance, but that would be greatly overlooking it is village-like charm.

Enriched by its own history, the local organizations and regulation take great measures to maintain and restore buildings and landmarks dating back well into the 1800’s. Main Street is an eclectic strip of local shops restaurants, and not too far is the yearly held Honey Bee Festival. Streetsville shares some qualities with Port Credit, but the former attracts a little less non-residents, which makes the place feel a little more closely knit.

It’s also an excellent place for outdoor activity seekers, as it borders on the Credit River, boasting beautiful trails for biking, running, and kayaking, as well open areas for picnics and other sports.

Aside from the charm, Streetsville does boast many suburban conveniences, including easy access to both the 401, and the Gardiner Expressway, Streetsville Go Station, and a comprehensive transit system. Due to it being one of the most north-eastern parts of town, succeeded only by Meadowvale, the prices are quite reasonable, sitting at an average of $683,000.

Lorne Park is locally known to be a very lavish part of town, which is a result of its history as a resort community. Popular in the 1800’s for their parks, picnic areas, and dining pavilions, people ferried here from Toronto on a daily basis. The wharf however collapsed in 1903, which lead to a decline in admissions and eventually the enterprise floundered. The resort was left populated exclusively by the wealthy Toronto elite who actually owned property there.

As such, one can easily see how the laid-back, upscale atmosphere has largely been retained since then, with luxurious cottage style homes, and beautifully tree-lined streets still present in the area. The homes sit on large properties, equipped with large pools, elegant driveway entrances, and general breathing room not found in many suburban and city locations. The houses are also very well kept, exemplifying the quality of the neighborhood It’s a safe, and quiet area, perfect for those looking to raise a family in peace, away from the stress and animation of Toronto. Ironically, with this kind of space and foliage, it is easy to forget that you’re actually still very close to the city, with denser subdivisions on its outskirts.

Although the Queensway provides easy access to the rest of Mississauga and Toronto, the area itself does not contain many facilities and services, making it inconvenient for those who can’t rely on a car. Lorne Park does however boast some of the best schools in Mississauga, with Lorne Park Secondary School being in the top 10 in Peel.

Like most downtown cores, Mississauga’s City Center is unparalleled for convenience. City Center offers walking-distance access to everything from big-chain restaurants, shopping at Square One (the second largest in Canada, next only to Alberta’s West Edmonton Mall), gyms, and various transit options that take you anywhere from Niagara Falls to Scarborough and Barrie.

Desired for its city vibe, it has seen an influx of young adults in the last few years that either can’t afford or don’t wish to pay the price of a Toronto home. Condos around the Square One Area sit around the low to mid $400,000’s, which is a drastic difference from the $1,000,000 and up condo homes in downtown Toronto.

With the exception of Corpus Christi, and St. Philip Elementary Schools, the area however does not offer the best schools in Mississauga. City Center also provides less for the active type, respectively speaking. Although many of Mississauga’s parks and athletic attractions can be easily reached by bus and car, there are only a few local bike paths and places to jog.

A true suburban dream, Erin Mills is one of the fastest growing areas in Mississauga, and aptly considered a mini-Mississauga of its own. Although not the most unique on our list, it does make up for it in convenience and price.

Wide roads running all throughout the neighborhood makes it a driver’s paradise, and there are certainly many places to drive. Split in two by the 403 Highway, and bordered by the 407, nearly all of Erin Mills residents have quick and easy access to the rest of the city and beyond. Near the core one can find Erin Mills Town Center, which although is smaller than Square One, provides many of the same amenities, and an arguably less hectic crowd.

Erin Mills also borders on the Credit river, providing many of  the same outdoor activities as Streetsville, supplemented further by the many parks sprinkled throughout the neighborhood, perfect for children and sports in the summertime.

There are many great schools to choose from, one of which is St. Rose of Lima Elementary, ranked in the top 5 elementary schools in Peel. It is also home to the University of Toronto’s Mississauga Campus, a hub for young students and an architectural sight that is surrounded by greenery, providing a quiet and nature filled haven for students, and those looking to escape the rukus of the city.

Erin Mills also nestles Credit Valley Hospital near its core, making it a short drive for the locals in need. House prices do vary in the area. Home prices vary in the area, with Condos sitting around the low to mid $400,000, and detached homes soaring as high as $1,500,000 in the south, close to Mississauga Road and dropping as low as $800,000 in the north, past the 403.